A little bash script for discovering the Windows 7 activity

maggio 22, 2013
Often during the investigation on a computer we need to have quickly a response on the activity of the computer itself, so we need a tool says to us when the device was on and off.
If we can take the file System.evtx placed in
%SystemRoot%\System32\Winevt\Logs\System.evtx
We could export it in CSV format using some tools or simply the EventViewer of  our Windows.
Let’s see what we can obtain, this is a piece of the file called system7.csv:

Now, we can make our script:

The cat command streams to the grep tool its content, the grep selects only the events listed into events.txt (13,12,42,1 and 41), the awk tool selects only the second and the fourth field using the symbol “,” as delimiter and finally the tool sedchanges the number of the EventId into a human readable event.
This is the output:

We can also to redirect the output to a csv file: 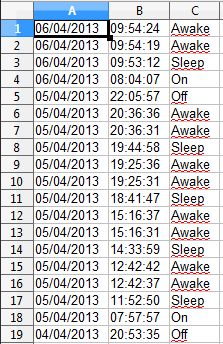 This is a quick method to have a view on the timelines of the computer life during a period of time, after this first overview, naturally, it could be useful to have a detailed timeline using others forensics tools like TSK, Log2Timeline, etc.
Author:
Dr. Nanni Bassetti
http://www.nannibassetti.com